Peppa Pig was another one of Corn Sky's favorite flashback shows. The show revolves around Peppa, an anthropomorphic female pig, and her family and friends. Each of her friends is a different species of mammal. Peppa's friends are the same age as she is, and Peppa's younger brother George's friends are the same age as him. Episodes tend to feature everyday activities such as attending playgroup, going swimming, visiting their grandparents, cousins, going to the playground or riding their bikes. The characters wear clothes, live in houses, and drive cars, but still display some characteristics of the animals on which they are based. Peppa and her family snort like pigs during conversations in which they are speaking in English, the other animals make their respective noises when they talk, with some exhibiting other characteristics, such as the Rabbit family's communications of squeaking sounds and their enjoyment of carrots. The Rabbits are also the sole exception to the rule of human-like habitation, in that they live in a burrow in a hill, although it does have windows and is furnished in the same way as the other houses. The characters also blush when embarrassed and their mouths are used to express other emotions such as sadness, happiness, irritation, bewilderment and confusion. 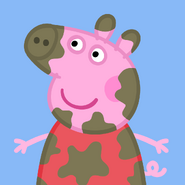 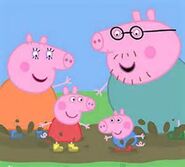 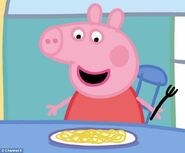 Add a photo to this gallery
Retrieved from "https://corn-sky.fandom.com/wiki/Peppa_Pig?oldid=34876"
Community content is available under CC-BY-SA unless otherwise noted.