Krave is a cereal created by Kellogg's. This cereal currently isn't in the little version yet but Corn Sky hopes one day Kellogg's will do so. Corn Sky collects this cereal occasionally. 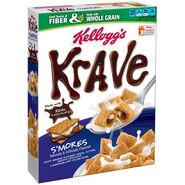 All 3 Krave cereals.
Add a photo to this gallery
Retrieved from "https://corn-sky.fandom.com/wiki/Krave?oldid=34050"
Community content is available under CC-BY-SA unless otherwise noted.